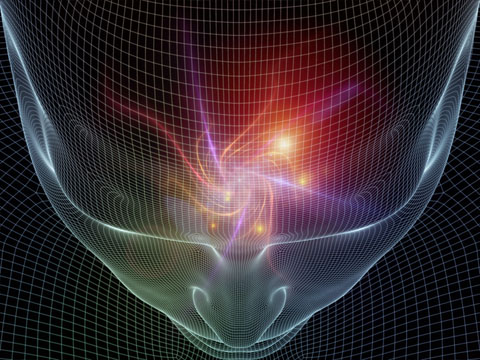 This might also become a visualization for you. It depends on how you’re built. This one is designed to give you a strong sense of integration with a larger you, one in whose imagination you actually exist. It has some similarities to the Split Awareness Visualization, the difference being that you are in effect creating the you through whose eyes you are watching yourself in Split Awareness, whereas in Encompassing Awareness you are being allowed, through practice, to perceive through this self-manifested intelligence.

Again, it’s very simple. This one is to be done seated, preferably with your head resting against some pillows (or whatever). The explanation of why this is useful is on the page for First Awareness Meditation.

Use some alchemy, sit down and get comfortable, put on your eyemask, and begin breathing deeply and evenly. Oval Breathing can be added to this one as well. With your eyes open behind the eyemask, begin by being aware that you are within, the product of, the imagination of a larger you. We’ve given the Russian Nesting Dolls as example before. You are therefore nested within the imagination of the next larger you.

Allow your eyes to close anytime you like. This one you are doing with your feelings, and so preferably you are seeing nothing but blackness, at least at first. But once again you are not to do any informing here, at all. As well, in using your feelings, you’re not willfully pushing them outward to probe within the imaginal mind of this larger you. You are instead observing as your feelings are allowed to extend away from you to begin filling the space of this larger imaginal domain.

The myriad what you might experience is probably about as varied as there are people, but certainly an expanded sensation is probable, and also perhaps a mild nausea from being more or less unseated from your local consciousness and expanding into one without spatial orientation or apparently solid things. If you wind up in second awareness, seeing yourself as though you were out of body, then wonderful. That's an excellent teaching effect.

Again, go easy with this one as well, at least at first, and keep in mind that it will probably never be more than a 20 minute conscious exercise. The reason we say conscious is because you might have to slip into non-consciousness to receive the full benefit of the practice from this larger self. In a totally conscious state, where you are fully aware of yourself and local space, there’s no need to exceed ten to fifteen minutes with this one.