As we approach the turning of another season, not to mention being at another Full Moon today, I thought it would be useful to step back from the noise and confusion of the everyday to consider again the major astrological themes that our shaping our world now.

First among these I would argue is the movement of Pluto through the sign of Capricorn, from 2008 into 2024. As I have been noting since before 2008, this passage of Pluto has accompanied the last several transformations from one kind of Spiritual/Cultural/Economic and Political order into another.

During the last such period in the 1700's, in what I would call the "Crisis of Kingdoms", most vividly experienced through the American and French Revolutions, the world that had been was torn apart by what was emerging from within it. That older system of Meaning and Form was superseded by a new Spiritual-Social-Economic order that we have come to know and experience as our “reality” in the present day "Modern World". Our Order is a world of Nation-States which have mostly, to varying degrees, held to some form of representative government that has now encompassed the world. It is this very Nation-State model, our world order, which is coming undone here from 2008 to 2024.

If we look back once again, to the previous period of Pluto in Capricorn in the early 1500’s, the world experienced another Catharsis of Becoming, that some have called a "Crisis of Faith", (named "The Reformation"). There had been, more or less, a world formed around the One Catholic Church and a Feudal Political/Economic Order, with accompanying Ideologies and World Views that formed and supported that system. Again, as in the period of the 1700’s, spiritual/cultural and economic developments emerged in that system that shattered that old way of being as the new order emerged from within it.

It was out of that disorder in the 1500’s that there arose the centralized Kingdoms or Monarchies, and with them there was created a new expression of what it meant to be human and a new Religious, Political, Economic and Cultural world came into being too.

Really, I would argue, it is the imperative of Spirit, the fundamental Energy-Form, which drives this one shining imperative for all of Life-Consciousness-Spirit…that is, it and we, and all life-forms are here for one thing only, to unfold our spiritual potential. We are here to be and become more and more fulfilled…which means we and all our vehicles or forms of self-realization must grow and change too.

What you and I must accept and understand is that what we are going through is not a unique experience, not at all. It is in truth a necessary moment in "The Way of Spirit”. It is how this Journey of Spirit will manifest again and again, because it is formed by the one Truth that resides at the core of Spirit, and so at the core of you, which is "to grow".

As I have repeatedly stated, this Driving Force of History arises in and streams forth from every Mind and Heart and Soul, it comes from you and I and everyone. We are the Living Spirit, and you and your companions are the Dreamer/Makers of all of this. This is the world that we humans made, and it is now our time to pass on the best of what was as we take up the challenge to re-make this world together.

This process of transformation is embodied in and executed through three major types of historical characters: The Preservers, the Creators and the Destroyers. There are those whose tasks may bend toward trying to preserve and pass down those elements of Wisdom, Beauty, and Love that have (and will always stand) these tests of time. There are other agents whose role is to be the bringer of new Ways and Means that will address the very limits and self-made problems that arose out of the passing order. And, there is a role for those who are here to tear down the old ways, who are the agents of Catharsis and Negation, and they too serve by disrupting the old order to make way for a new.

Accelerating this End of an Age is another major “Wind of the Spirit”, carried by the Avatar of Awakening, the Planet Uranus. From 2018/19 until 2026, Uranus is moving through Taurus. As before, we can get some understanding of this influence by casting our view back to its previous passages through the Sign of Value.

The previous times for Uranus in Taurus were 1935-1942, 1851-59 and 1768-75. In each of those periods, Uranus as The Awakener accompanied significant shocks and conflicts, leading to the upheaval in the hierarchies of fundamental values, as differing value systems within and between cultures, broke apart the glue that hold societies together. When there is loss of a strong consensus, when we lack a significant agreement on commonly accepted values and virtues, it is then that the “center cannot hold” because it seemingly (or actually) does not exist.

Looking to the United States, the most recent passage was in the late 1930’s which led up to the “War of Democracies versus Fascism” or World War II; in the 1850’s Americans struggled over the fundamental nature of our country and it led to our defining conflict, “The Civil War” from 1860-65, and the 1760’s-70’s witnessed the breakdown between the American colonies and England, leading to the “The Revolutionary War”.

Given those three previous passages, we must be prepared for great changes, as we witness the breaking of our old value hierarchy as we equally have a profound opportunity to create a new commonly held value system.

I would argue that to do this we need, each of us individually and together in our communities, to remember and rely upon the eternal truths found in the Perennial Teachings or Ancient Wisdom. By holding to this bedrock of spirit, we can be Loving, strong and centered so that we may respond to this challenge with faith and not in fear. 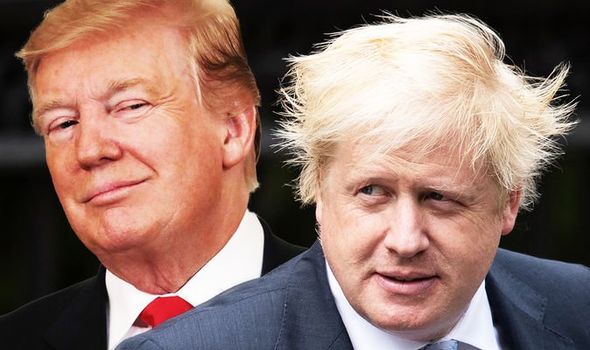 Yes, it is quite a moment we find ourselves in, and the parallels between what is happening here in the USA and what is happening in the UK (and the world for that matter), are quite simply uncanny. The very so-called “mother of modern democracy”, The United Kingdom, and her “child”, the United States of America, are facing fundamental challenges to their Political-Economic and Cultural integrity. Both are being led now by very similar men, both who happen to be Geminis. It certainly seems we are in some kind of historical rhyming that is no accident.

I would most certainly characterize both Boris Johnson and Donald Trump as being or using their Gemini gift of contrariness and their multiple, conflicting points of view as instruments of extreme disruption. Their aim is to divide, to disrupt the political-social order so as to rule by confusion and fear, as they forge their power through myriad splits of “us versus them”.

By proposing a series of multiple and contradictory assumptions, by splitting reality into many mirrors of inchoate meaning, they are agents of disruption who seek to destabilize the rules and customs of the old order as they throw out half-truths and falsehoods that undermine the normal governing consensus and shared reality.

They seek to divide rather than unite and are quite extraordinary examples of cathartic/iconoclastic agents who are breaking down the old established order. They are not builders but destroyers. They serve by exposing the weakness and contradictions of the old order. But they are not capable of creating a new world or paradigm, because their very power arises from the contradictions of the old, and it will fail and fall as a new world rises.

Each of us must find our way, to do our part in this world that is passing away. Though this world we made is undergoing great changes, there are fundamental truths that will always remain. The Eternal Values of the Ancient Wisdom, which have guided our footsteps since the beginning, these Treasures of Truth, are the most precious gifts from all our ancestors. It was their duty to protect and pass down to us these building blocks of Wisdom and Love, and these Songs of the Spirit are equally to be found in your own heart and higher spirit too. It is now your duty and privilege to stand in this light and build a better world.

You happen to be here, at this crucial hour. What an honor and privilege this is; what a responsibility you bear. You have earned this; you are here in this ending that is a beginning, you are here to be “Torchbearers of the Light”.

This is no error or happenstance; you are exactly where you are supposed to be. You are part of a greater plan, and all those choices you made long ago have brought you and I to this moment now.

Always remember, that behind each culture, in the Diamond Heart of every Civilization, in the heart of all Religions, in all the Philosophies and Sciences of every age, the Shining Ones hold the Archetypes of Eternity.

By moving beyond the old divisions, by striving to preserve what is ever-present in the realms of Wisdom, Beauty and Love, and by listening to the Light of Truth within your heart, through you and your companions a new world will rise once again.

Annoying Question of The Week

I admire people who tell it like it is. So don't tell me what I want to hear. You're already such immensely great liars, you'd do yourself a disservice to merely parrot back what you think the…Continue

The event horizon I've been feeling-seeing for a few years is not what I expected it to be. So here's what it is, guys and gals. It's the coming quantum internet as discussed by Austin Steinbart.…Continue